I absolutely love giving starter sets to new players. Its a great way to get someone interested in your own hobby, or get them going if theyve shown some interest in playing D& D. This set comes with everything you need!

You cant go wrong with this sarcastic D& D gift idea! Theres other options out there, but I really like the +5 sarcasm mug. We all have a friend that needs this.

Coming off the success of this summers D& D Live featuring celebrities including Jack Black, Tiffany Haddish, and Patton Oswalt, G4 and Wizards of the Coast continue their partnership for a weekly D& D series focusing on improvised comedy, entertainment, and accessible gameplay. For the first time, TV audiences will be able to see the comedy of friends rolling dice together and the drama of a natural 20 rolled for a critical hit!

Invitation to Party, televisions first program dedicated to tabletop gaming, will bring together a group of comedians and content creators who form an intrepid party of adventurers as they roll the dice for riches, glory, and survival. Viewers who watch during the shows livestream on Twitch and YouTube will also have a hand in the action as theyll be able to directly affect gameplay via real-time voting. Outrageous prompts, story beats, NPC characters, and obstacles will be imagined and sourced by our viewers at home , for the DM and Players to execute.

Dungeons & Dragons Presents: Invitation to Party will be streamed from G4s new, first-of-its-kind 24/7 broadcast studio, featuring a tavern-designed set lovingly dubbed The Rotted Gut, where the players will have a space to get out from behind the table and improvise their role-playing encounters with each other and a revolving roster of guest NPCs.

Be Sure To Check Out These Party Ideas And Elements From This Fabulous Dungeons And Dragons Birthday Bash:

Dungeons & Dragons Party Details:This is what Monina said about designing the party-

This was a simple party for my son who loves role playing games and his 7 friends. Each boy received a premade character sheet created by the birthday boy, a dice bag, and a small notebook.

I created all the graphics in Illustrator and added my crafty bits to the party with the help of my printer, Silhouette Cameo, and whatever materials I had on hand. I leveraged the most recognizable and essential part of the game, the dice. The most iconic die is the D20, a 20 sided dice.

Some of the boys were new to D& D, others quite familiar and play regularly, but all seemed to be thoroughly enjoying themselves. Id peek in frequently to see them crowding around the table drawing their fantasy world. I could hear them speaking in character. And I observed them figuring out how to work together to conquer some monster or complete a task. It was fun to see their enthusiasm, and I was happy my son was able to share his love of D& D with his buddies.

Despite all my reservations about a D& D party, it was a success! All the credit goes to my son who spent a lot of time creating characters for his friends, and the Dungeon Master who conceived a fantastic campaign that kept the boys riveted for 3 hours!

Party Supplies Available from this Party:

Look, were all about the parties here at Munch and Brunch. As an event planner, I love finding unique party themes. Being a bit of a geek myself, I couldnt resist dreaming up some fantastic D& D party ideas.

If you dont already have a group, why not throw a Dungeons & Dragons party to get some friends to try it out? Who knows, it might turn into a regular thing.

Or just pick up some of these fun gift ideas for any Dungeons & Dragons fan in your life.

Note: This post contains affiliate links. That means we earn a commission when a purchase is made through one of our links. 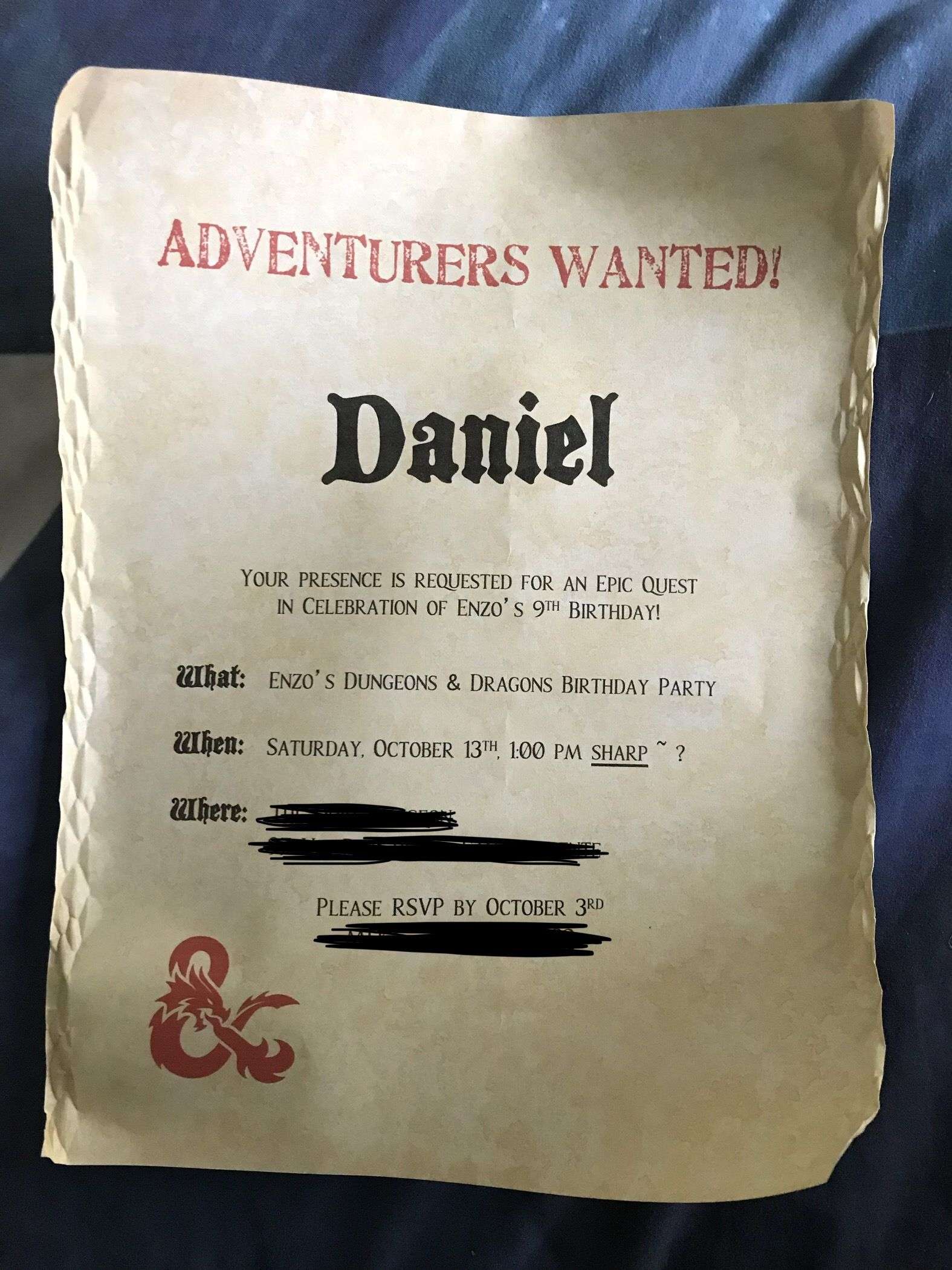 Thank you for visiting, If you found any images copyrighted to yours, please contact us and we will remove it. We don’t intend to display any copyright protected images. We hope you can find what you need here. We always effort to show a picture with HD resolution or at least with perfect images. Popular of D& amp d Birthday Meme 25 Best Dungeons and Dragons Birthday Meme Memes can be a beneficial inspiration for those who seek an image according to specific categories like Birthday Memes. Finally, all pictures we have been displayed on this site will inspire you all…

Read Also: Do You Get Free Dunkin Donuts On Your Birthday

B.Dave, you have worked on so many TTRPG and D& D-related projects. What was it about Invitation To Party that made you say yes to being the DM of the series?

B. Dave:I came up watching the original G4.So, getting to work with them earlier this year on D& D Live was already a dream come true.The best thing about this project is were going to be the first to do a D& D actual play on TV. Theres not a lot of firsts left in this world.So, having an opportunity to break some new ground and advance the game I love so much was too good of an opportunity to pass up!

Im excited to you guys on this show. Do any of you have experience with Dungeons and Dragons and what are you hoping to get out of this amazing experience?

Kassem: My experience with D& D is very limited. I think out of everyone I am the greenest. It was important for me to try something new but more importantly, make this game accessible for others like me. A lot of things in nerd culture have gatekeepers and arent always the most inviting. Id like to be able to bring brand new players, like myself, an easier entry point into D& D. Because it really is such a special game.

So who are you guys playing on this show?

Kassem: Im playing Ignius Cassalanter. a reborn Human warlock with a strange past. Hes charming and slick and can sell a ketchup popsicle to a woman wearing white gloves. Hes looking for power and one day would like to be the Open Ruler of Waterdeep.

You May Like: What To Do For A 3 Year Old Birthday Party

Seller: cardtailors99.7%, Location:Wiltshire, GB, Ships to: AMERICAS, EUROPE, ASIA, AU, Item:293181217151DUNGEONS & DRAGONS Personalised Birthday Card – personalized role playing table. Looking for a personalised greeting card?. You can be sure Cardtailor can suit your needs! Let us know and we can change it. No AGE will be printed if none is given. International orders. How To Personalise.Condition:New other , Condition:BLANK inside as standard. To PERSONALISE, Click “Add a message” above your item during checkout and type the NAME / AGE / ETC in the box provided. Click “Add” when done and then finish your order., Type:Personalised, Occasion:Birthday, Brand:CardTailor, Country/Region of Manufacture:United Kingdom, Theme:Anime See More

Prior to its official relaunch, G4 hosted a series of “Beach House” streams. One of the biggest events in July 2021 was “D& D Live,” a two-day series of live plays featuring tabletop experts and celebrities including Jack Black, Kevin Smith, and Patton Oswalt. D& D Live was a collaboration between G4 and Wizards of the Coast to advertise new sourcebooks like Fizban’s Treasury of Dragons. That partnership continues with Invitation to Party, a weekly program that streams every Friday, but is also advertised as the first D& D show airing on television via G4’s mixed-medium format.

The first of four planned campaigns to feature on Invitation to Party is “The Scoundrels of Waterdeep.” It’s led by B. Dave Walters, an actor and official writer for tabletop games like Dungeons and Dragons, who has also appeared in prominent live series like CollegeHumor’s Dimension 20. Gharaibeh plays a reborn warlock and noble with a mysterious past and agenda, named Ignius Cassalanter. Also in his party are Nova, playing the harengon sorcerer Ollie Indiana “Froskurinn” Black, playing the dhampir rogue Octavia Amistacia and Ify Nwadiwe, playing the human bard Thorbie Gontiki.

Read Also: Birthday In A Box For Him

A Dungeons And Dragons Tv Show Is On The Way

Dungeons and Dragons is coming to the television later this month in a new actual play series. Titled Dungeons and Dragons: Invitation to Party, the weekly series will see a regular cast of comedians and figures of the tabletop RPG community play D& D live, in a similar vein to Critical Role and other livestreamed podcasts. The series will premiere on TV channel G4, and livestream on Twitch and YouTube on November 22.

Billed as the first actual play series to air on television, Invitation to Party will feature B. Dave Walters as its Dungeon Master, who has previously written the D& D comic book series A Darkened Wish and has appeared on several other actual play series. Joining him as players will be YouTuber and internet personality Kassem Gharaibeh, TV actor and writer Ify Nwadiwe, esports commentator Indiana Black, and actor Fiona Nova.

As well as portraying the usual roleplaying, exploration, and combat of D& D, Invitation to Party will also involve an element of audience participation. Viewers watching the shows livestream on Twitch or Youtube will be able to vote on story beats, NPCs, and obstacles, directly influencing the shows gameplay and progress.

Speaking to IGN, Walters said of his fellow cast members: I think the most interesting thing is the broad spectrum of backgrounds and interests everyone brings to the table, and how thats manifested not just in their character choices, but in how they embrace this new way of playing D& D.

Turn An Upcoming Birthday Into An Unforgettable Event 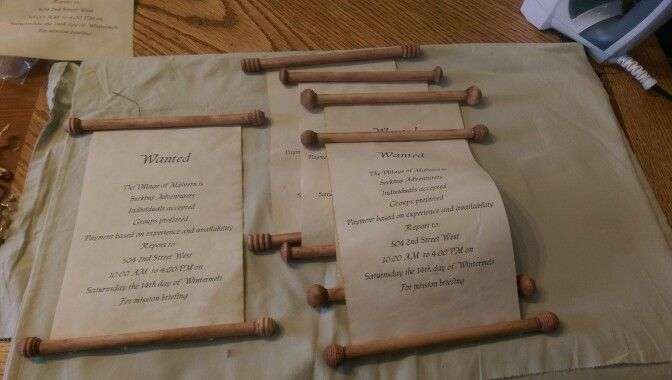 Preparing to celebrate a special birthday? Our collection of adult birthday invitations is designed to help you with the party-planning process. A set of adult birthday party invitations can set the right tone, whether youâre hosting a surprise party, a milestone celebration or a themed event. And with an assortment of customisation options â styles, paper stocks and more â you can create an invite as unique as the person being honoured.

Ready to start creating your adult birthday invitations? Explore our design gallery, which features a wide array of fully customisable templates â you can see all your options at once, or filter by colour, theme and more. Once youâve found a design, youâll be able to add all your custom details in our online studio. After perfecting your design and selecting your paper stock, simply place your order and let us take care of the rest. Weâll professionally print and package your invites for you â and your custom creations will arrive ready for use.

Birthday Cakes With Photos On Them

Create A Birthday Card With Pictures

Places To Have A Toddler Birthday Party

Does Benihana Do Anything For Birthdays

Places To Have A Sweet 16 Birthday Party

Places To Rent For Birthday Party For Adults

Best Places To Have A 21st Birthday Party

Places To Have A Toddler Birthday Party

The Big One Birthday Invitation Template

Where To Get Birthday Invitations Printed

Deliverable Birthday Gifts For Her

Gift Baskets To Send For Birthdays

Vegas Birthday Ideas For Him

35th Birthday Celebration Ideas For Her